In from the Wild – 7 Celebs with Exotic Pets

Actress Reese Witherspoon is super-southern and proud of it!  She grew up in Nashville, played country music star Johnny Cash’s wife, June Carter in the film, Walk the Line, and named her third child, Tennessee.  So it is not surprising to learn she has two pet donkey’s named Honky and Tonky.  Hee-Haw, Hee-Haw! 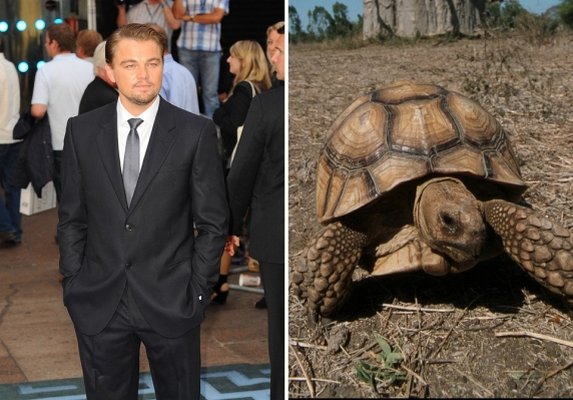 Actor Leonardo Dicaprio lives a fast-paced life, so he likes to relax at home with a slower companion, his pet tortoise.  The pet Sulcata tortoise can live to be 80 years old and weigh as much as 200 pounds.  The tortoise is probably not a fan of Dicaprio’s critically acclaimed film, Catch Me If You Can.

Kirstie Alley’s pet lemurs have seen her through her whole acting career.  She has had them for 30 years and spends a whopping $40,000 a year on the furry, wide-eyed pets.  They are even in her will.  Now that’s some ludicrous lemur love!

Vanilla Ice and his exotic pet Wallaroo have a lot in common.  They both like to jump around and are vegetarians.  A Wallaroo is a cross between a wallaby and kangaroo.  His pet is appropriately named Bucky Buckaroo.

Tori Spelling’s relationship with Dean McDermott might be on the rocks, but that doesn’t mean she is sleeping alone these days.  She shares her bed with her pet chicken named Coco Chanel.  Coco is treated like royalty with her own sherpa-lined dog bed, nice sweaters, the run of the house, and she even gets to tag along when the family runs errands.  That’s one fancy chicken!

In the movie Twilight, actress Kristen Stewart frolics with a wolf-human hybrid, but in her everyday life, she cuddles with the much cuter wolf-dog hybrid.  Stewart’s mother raises wolf-dog hybrids and Kristen has taken a liking to them.  With four wolf-dogs running around, full moons must be wild at the Stewart household.